5 Dishes From Puebla You Must Try 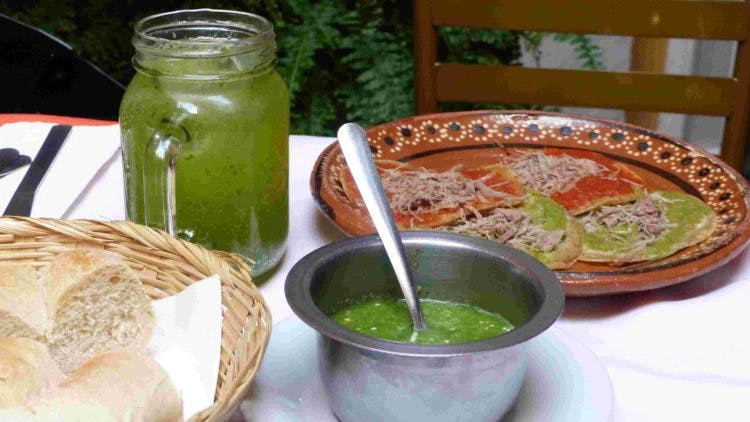 As a Mexican food enthusiast who operates a Mexico City food tour company, a visit to Puebla was essential! Located just 120 KM from Mexico City, not only is Puebla a beautiful city to explore, it is one of Mexico’s most popular foodie destinations. Puebla is the cradle of a long list of iconic dishes, making it rich in Mexico food history. The following emblematic dishes all originated here:

Here is our list of five dishes from Puebla you must try when you are in town!

Puebla, Oaxaca and Tlaxcala all claim to be the originators of mole. Personally, I was never a fan of mole until I tried the classic mole poblano in Puebla. It is a smooth, rich, textured sauce that is extremely laborious to prepare from scratch as it contains up to 20 ingredients that are roasted and then ground. Poblano mole is a very traditional sauce in Mexico, typically served over turkey, chicken or enchiladas at special occasions (weddings) or holidays (Christmas). The special ingredient that gives it its color and sweetness is cacoa, other important ingredients are chiles, onions, garlic and nuts.

A common legend of mole poblano’s creation took place at the Convent of Santa Rosa in Puebla during the early colonial period. It is said that upon hearing the archbishop was planning a visit, the convent nuns went into a panic since they were poor and had almost nothing to feed him. They prayed and cobbled together the bits of what they did have, including chili peppers, spices, old bread, nuts and some chocolate. They harvested an old turkey and cooked it, then put the sauce on top. The archbishop loved it and when he asked the name of they dish they replied that it was a “mole” – the ancient word for mix.

My wife’s favorite Mexican sauce is an ancient dish that is even older than mole poblano called pipían. It is similar to mole poblano but preparing pipían involves roasting and then grounding up pumpkin seeds to use as the base. Tomatillos, cilantro, chili peppers, garlic and onions are its key ingredients and it does not contain chocolate but often mashed plantains are added for sweetness and thickening. The red version of  pipían gets its coloring from the use of red peppers. We were lucky enough to find a beautiful restaurant in Puebla that incorporated mole poblano, pipían rojo and pipían verde into one tasty dish.

The name refers to the roll it is served on as well as the sandwich. A cemita roll resembles brioche, is egg based and always topped with sesame seeds. A cemita sandwich is huge so some of the bread filling from the top half is scooped out to make it more manageable. The proper order of fillings in an authentic cemita from the bottom up are; half of an avocado, a protein – milanesa (breaded cutlet) is common, then Oaxacan cheese, then onion and jalapeño or chipotle and then leaves of the pápalo herb before a drizzle of olive oil is added to top it off. The pápalo herb adds a distinct flavor to the cemita that some people love but lots do not.

While the authentic and original cemitas in Puebla are fantastic, my favorite is in Mexico City’s Colonia Roma where La Buenavida Fonda serves an incomparable pork belly cemita.

A chicken milanesa cemita from Cemitas El Carmen in Puebla.

This traditional dish from the state of Puebla is only available in August and September when the ingredients are in season. Chiles in nogada sport the colors of the Mexican flag, making it a popular dish during Mexico’s Independence Day (September 16) celebrations. The dish is made by stuffing a poblano pepper with picadillo (ground meat, fruit and spices) before it is bathed in egg batter and fried. Then it is plated and topped with a white walnut sauce (nogada), pomegranate seeds and parsley.

Chalupas can be found everywhere from street food stands to fine dining restaurants. After being heated on the comal, tortillas are topped with salsa, onion, shredded chicken, beef or pork and voila – you have a delicious snack.

During the 1930’s many Lebanese immigrants settled in Puebla. They introduced the vertical spit used to cook the marinated pork taco meat. These tacos are served in a flour tortilla called pan arabe that is very similar to pita bread.

Our visit to Puebla allowed us to sample several authentic dishes Mexican cuisine is most famous for while providing insight into the flavors. This was invaluable when it came time to select vendor locations for our our gastronomy tours in Mexico City.’ With some dishes the original authentic versions have evolved to make them even better, as with the pork belly cemita mentioned above. Enjoy!