6 Types Of Tacos You Must Try In Mexico City 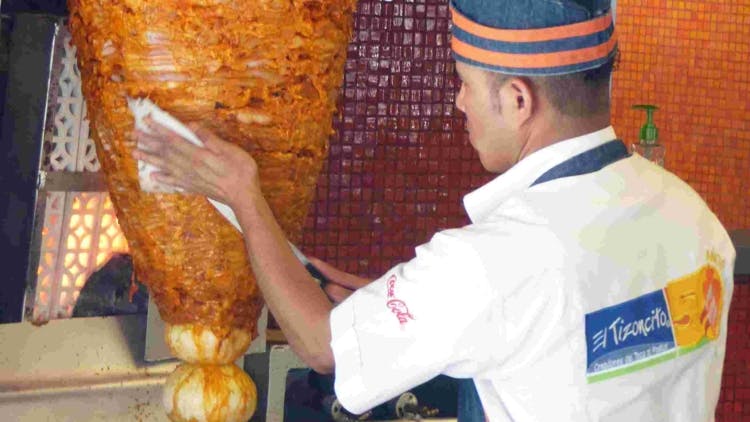 If you live in or visit Mexico City, you will notice that taco stands and taquerias are on every street and every corner – no lie. I now refer to this food filled city as Taco Land! I love tacos, but the ones I grew up tasting (think Taco Bell) are nothing like the tacos enjoyed here.

The number of different types of tacos here can be very overwhelming especially if you have not grown up with them. All of them are similar in that they are delicious and cheap but there are different preparations, different types of meat and vegetables used and different toppings. If you don’t have time to do some taste research, this article should help, or my husband and I offer a few delicious ways to learn about and consume tacos on our curated food tours.

Here is a quick list and description of some of the most tasty and common tacos you will find lining the streets and bellies of Mexico City.

This is probably the first type of taco you will take notice of in Mexico City because they are the most popular and are prepared in a similar way to shawarma on a vertical rotisserie (trompo). They originated in the city of Puebla in the 1930’s when Lebanese immigrants introduced them to  . The Mexican sheperds adapted the technique replacing the lamb and switching it over to the easily found pork.

However, El Tizoncito and El Huequito both claim to be the first taquerias to create the al pastor. I was informed that El Huequito was the first taquería to introduce the taco al pastor to Mexico City in the late 1950’s. Aside from using pork instead of lamb, they have stayed true to the original Arabic recipes by not using chiles in their marinade or pineapple on their tacos – however, they do have a fantastic orange salsa made with arbol chiles.  El Tizoncito was the first taquería to add the now beloved pineapple to their tacos al pastor in the mid 1960’s. The marinated pork is usually served on small corn tortillas, with cilantro, chopped onion and pineapple.

All taquerías have their own proprietary marinade but they all contain chiles and achiote paste, which gives the meat its distinctive orange coloring. The magnificent sweet and sour flavor has created an insatiable demand for these tacos that are found across the city at street taco stands and taquerías from the early afternoon to late into the night.

These tacos are ones I had never tasted outside of Mexico and are now are among my favorite type…well maybe they are all my favorite. Guisado tacos (stewed tacos) are typically eaten in the morning or for lunch, they usually disappear by 3 or 4. They are often thought of as home-style or comfort food by locals, as mamas and abeulas would often have big pots stewing on the stove so the family, who arrived home at different hours could go to the kitchen to scoop some delicious stewed filling onto the always ready corn tortillas and have a comforting, ready-made meal.  These fragrant stews are placed in earthenware clay pots called cazuelas to keep them warm, but are best had in the morning while they are still hot and have not been sitting out all day getting cold. These are an ancient taco with endless variations, basically any ingredient that can be stewed or braised has likely been used to make a guisado taco somewhere in Mexico.

At most taquerias or fondas you will find over a dozen different choices, often including many vegetarian options, such as breaded cauliflower or chile relleno, as well as favorites for meat lovers, everything from picadillo hash (ground beef with veggies), pollo de tinga, and some more adventurous stews. Rice, beans and cheese are common additions and if you are lucky some places offer guacamole. Have you noticed guacamole is not a common addition at most tacos in Mexico City? Guisado tacos are known as “fast food” since the fillings are prepared in advance and its quick scoop onto your tortilla and plate.

The canasta taco (basket taco), so named because they are traditionally sold in the streets of Mexico by basket toting vendors on bicycles or stands also unattractively referred to as taco sudados (sweaty tacos) or tacos al vapor (steamed tacos). I liken them to the texture and taste of a perogy (especially if you order the potato one) and I adore perogies. These tacos are drizzled with oil and steamed in a wicker basket lined with parchment paper and plastic for about two hours before enjoying. The typical fillings include potato, refried beans, adobo (pork marinated in a guajillo chile sauce), and chicharrón. Add escabeche (pickled vegetables) with some spicy salsa and enjoy.

Carnitas literally means “small meats” and they originated in the state of Michoacan. These pork tacos are traditionally made by braising or simmering the pork in its own lard in copper pots, once the lard has melted, salt, chili, cumin, oregano, and thyme, along with crushed garlic and fresh orange juice are added. The pork slowly cooks for about 4 hours resulting in very juicy and tender “small” pieces of meat.

The entire pig is used in carnitas so if you ask for a carnitas taco you could get any random part of the animal. If you are squeamish ask for the maciza (lean cut from the shoulder or loin) or the chamorro (shank). A classic carnitas taco is topped with diced onion, cilantro, salsa, sometimes refried beans and always and a squeeze of lime.

Carnitas tacos with all the fixings!

The name refers to a preparation of lamb (but sometimes birría or beef) where quite often the entire animal is steam cooked in an underground oven pit until succulent. Meat is wrapped or covered in maguey leaves and left to cook for up to ten hours. In central Mexico barbacoa refers to lamb, but each region has its barbacoa meat preference. Barbacoa is especially popular on weekends when vendors who have prepared it in the country bring it to the city to be enjoyed over long, leisurely lunches. Some say it’s a great cure for a hangover as well!

Barbacoa taco loaded up with salsa, onion and avocado.

This is my husband’s favorite tacos because it is soooo tender. Suadero is the only taco to originate in Mexico City, and is usually made from beef brisket or beef from the lower parts of the cow. The secret of the suadero taco is the special concave comal that is used for cooking. This unique instrument is relatively unknown outside of Mexico. The concave comal is a griddle and a deep-fryer at the same time. Taqueros cook almost every part of the cow in this gigantic comal filled with bubbling broth, meat juices and lard – I call it a meat jacuzzi. Once you order your preferred taco, the meat is taken from the meat jacuzzi, then caramelized to perfection on the flat comal (griddle), before it is chopped on a wooden block (tronco) and placed on a corn tortilla. Add a squeeze of lime and salsa – simple and delicious!

I hope that after reading this you will follow your nose and hungry tummy to the world of tacos that are right outside your door. Buen Provecho!