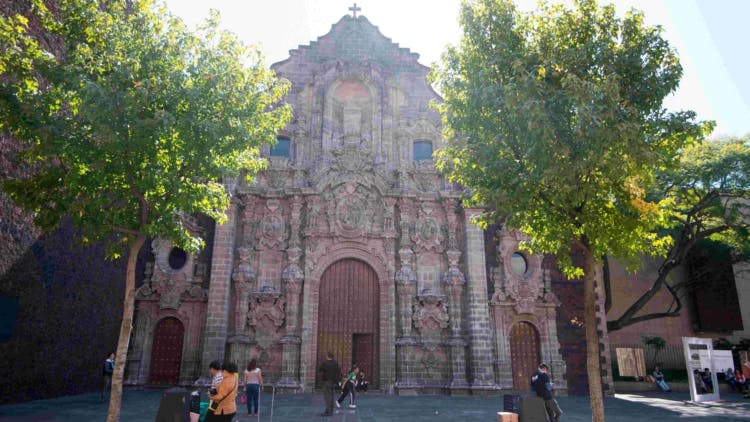 Mexico City, with its quaint back streets, first class cuisine and eclectic and vibrant night life is an amazing place to visit all year round. In the spring, the city celebrates Semana Santa, and pays homage to its deeply religious Roman Catholic roots. From the 13th-century Templo Mayor to the historic murals of Diego Rivera, and the wide open Zócalo, every neighborhood in the city takes on a new perspective during Easter.

What is Semana Santa?

Semana Santa is the Mexican celebration of Holy Week that takes place over Easter. Dating back as far as the 16th century, the parades and celebrations that take place across the city present the story of the passion of Christ. Bright and colorful processions traverse though the streets and depict the story of the crucifixion and the resurrection. Semana Santa is still celebrated with as much pomp and circumstance in Mexico City today as it was in the 16th Century.

If you are planning on visiting Mexico City during this special time of year, be prepared to be amazed. Mexicans take the Easter celebrations to a whole new level, and the festivities mark their second most important festival after the Day of The Dead. Schools and offices close for several days before and after the Easter weekend, and many residents choose to leave the city to visit the coast. But don’t think you will have the city all to yourselves, as plenty of residents still stay behind to enjoy the processions and celebrations.

The holiday runs from April 18 to April 22 in 2019, and with schools closed and residents headed for the beach, visiting at this time of year does mean that you will be able to enjoy a calmer, less crowded city as well as experiencing the fantastic Passion Plays and parades that take place during the Holy Week.

Flights to and from the city however will be busier than usual, as will hotels and resort accommodation close to beaches surrounding the city as locals cut loose for the holidays. It is a great time to enjoy a walking food tour of Mexico City as restaurants will still be open and ready to seduce you with first class Mexican food.

The Cathedrals and Basilicas of the city hold special services everyday during Holy Week. With altars and halls decked with flowers, and elaborate ceremonies held to celebrate the Last Supper and the Resurrection, the religious importance of Semana Santa cannot be underestimated.

Just outside the city, the town of Iztapalapa plays host to elaborate and inspirational Passion Plays. Participants spend many months preparing to take on the roles of Jesus, the Virgin, Pontius Pilate and even Kind Herod and take their celebrations very seriously. Each day leading up to the Easter Sunday see’s a reenactment of the various stages of the crucifixion and resurrection.

On the Sunday before Easter, Domingo de Ramos, or Palm Sunday, the arrival of Jesus in Jerusalem is commemorated. The day that he rode triumphantly into Jerusalem on a donkey to be greeted by palms, is an important affair for the residents of Mexico City.

All across the city, squares and open spaces will be packed with worshippers queuing to enter the church, singing songs of celebration and waving palms.

On Maundy Thursday – Jueves Santo – residents attend extended Mass and commemorate the washing of the feet of the apostles and the Last Supper, by taking part in foot washing ceremonies in churches and Basilicas throughout the city.

Good Friday – Viernes Santo – is the time for solemn religious ceremonies, as residents recall the crucifixion. Statues of Christ and the Virgin Mary are carried through the streets, and Passion Plays take place in Iztapalapa, just outside Mexico City.

On the Saturday before the main event, Sabado de Gloria, there is a custom of burning effigies of Judas, made from paper cache or cardboard. Sometimes they are made to look like Satan, or more often they are made to resemble contemptuous political figures.

On Easter Sunday itself – Domingo de Pascua – you will not find any chocolate eggs or Easter bunnies in Mexico City. Instead, residents of the City will spend the day with their families, attending Mass or celebrating in the streets with fireworks, music and dancing.

Throughout the celebrations of the Holy Week there is always lots of delicious, local food to be found across the city. The Roman Catholic Lenten traditions dictate that no meat is eaten on Fridays during lent, so instead Mexicans fill up on fish soup, lima beans, raw shrimp, shrimp patties as well as nopales, and dried Italian squash.

Giving up meat for Lent is also an excellent opportunity for visitors and locals to enjoy the finest plant based diets that the city has to offer. Our vegetarian walking food tours give food lovers the opportunity to enjoy the growing movement for non-meat based eating in the city, and explore some of the most alluring, stylish and chic neighborhoods of Mexico City.

Mexicans like their desserts so even if they don’t give and receive chocolate eggs on Easter Sunday, your sweet tooth won’t miss out. Mini hotcakes served with marmalade, fried plantains with a sweet, cream topping and empanadas, fruit turnovers made with apples, blackberries, cherries, apricots, or strawberries are just a few of the delicious desserts on offer across the city throughout Semana Santa.

Semana Santa is the perfect time of the year to explore Mexico City as the people celebrate their own religious beliefs in a way that is rarely seen anywhere else in the world.